UX Interpretations could be a useful technique to translate common poorly-specified requirements into a more UX friendly format. 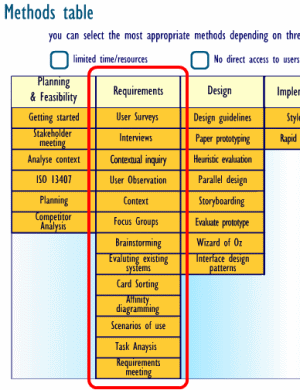 Some User-Centered Design techniques are supposed to be conducted during the requirements phase of the software development life-cycle, but in most real-world projects the usability/UX team cannot perform them, usually for reasons like these:

Yes, we know that the UX team should participate since the early stages of the development, but… what can we do when we are faced to given requirements, which are usually incomplete, long lists of technical features, and which have nothing to do with UCD techniques like use cases or user stories?

Last June, Greg Lauger explained in his article ‘Matching Requirements with User Experience‘ on Johnny Holland Magazine some techniques used in that kind of situations, and I think that the ‘UX Interpretation‘ approach (he calls it a “collaborative clarification”) is a great idea and could be used as a UCD technique on its own.

For every single requirement (or every important requirement, or every unclear requirement), the UX team would develop the corresponding ‘UX Interpretation’, following this simple structure:

The UX interpretation could be a use case, a storyboard, a prototype… any technique which described the implications on the interaction of that requirement. After that, the interpretation would be reviewed by other members of the development team.

What would be the purpose and benefits of these interpretations?

So… do you think you could have used this technique in some past situation? Or better… Do you think this could be useful in future projects?